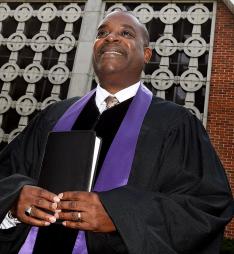 "Pastor G" was born in Long Beach California on April 1964 and raised in Roselle, Princeton and Trenton, NJ where his stepfather served as an AME minister.

"Pastor G" was active in Sunday school, Usher boards, Youth choirs and YPD.  After graduating from Princeton High in 1982, he attended Rutgers University where he received both his Bachelors and Mastor's Degrees in Social Work, as a licensed clinical social worker he assumed several led jobs working in medical, mental health and youth development.  During this time he earnestly sought the Lord and became active in a variety of congregations, including the Baptist, United Pentecostal, COOLJC and AME churches as the Lord lead him to serve.  He has labored in a variety of lay leadership roles which include serving on evangelism teams, being a senior deacon and steward in several congregations.  In 2006 under the direction of God, he returned to Greater Mount Zion AME Chruch in Trenton, NJ.  There, he served as a member of the senior steward board, vice chair of class leaders, former Sunday school teacher, former didrector of lay activities, former YPD/Rites of Passage leader, and teen bible study co leader.

In 2008, he heeded the voice of God and acknowledged his call to the preaching ministry.  While attending seminary, he was blessed to receive his first appointment as an Itinerant Deacon to become Pastor of Bethel AME Church in Pennington, NJ.  In March of 2015 he became an Itinerant Elder in the African Methodist Episcopal Chruch.  The following month, he graduated from Princeton Theological Seminary and received his Masters of Divinity.  Since then, he has served as Pastor at Mt. Zion AME Church in Trussville Alabama, St. Paul United Methodist Church in Willingboro, NJ, Supply Pastor at Union AME in Allentown and Bethel AME Church in Millville, NJ.

In September 2019, "Pastor G" was elected to serve as the Pastor of the Second Calvary Baptist Church in Hopewell, NJ following the leadership of his close friend the Reverend Michael Diggs.  Pastor Smith is excited to see how the Lord will manifest in this phase of ministry.

"Pastor G" is the proud husband of Ka'marie Magby-Smith and is the father of five children and two grandchildren.

One of Pastor Gregory's favorite scripture is Jeremiah 33:3 "Call unto me and I will answer thee, and show thee great and wonderful things, that thou knowest not"