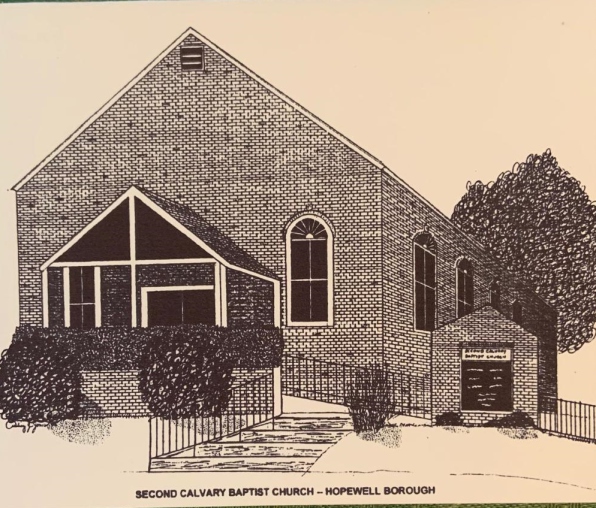 A Little Church With a Big Heart
MISSION
The mission of this Church shall be to preach Christ, and to teach and practice Christianity as taught in the New Testament, and to carry out the principles of God's Word in accordance with biblical doctrine.
CHURCH HISTORY
During 1894-1895, a group of Christian men and women met in their homes on Wednesday and Sunday evenings for prayer and fellowship. In 1897, this group of Christians held a revival meeting in Stoutsburg, NJ. From that revival, a Church was founded which became recognized by the New Jersey Council of Ministers. Constitutions and by-laws were incorporated September 1897. The Church was originally known as The First Colored Calvary Church of Hopewell Borough. We still have a list of 12 known gravesites and approximately 10-12 unknown and unmarked graves at the First Street Cemetery. The morticians at the time were Dade and Newsome. The congregation later selected the name Second Calvary Baptist Church. The present Church building at 69 Columbia Avenue was completed in 1959.
PASTORAL HISTORY

The first Pastor and one of the founders of Second Calvary Baptist Church was the Rev. Thomas Johnson, coming from the south, he diligently served until his death in 1914. He and his wife are buried in the Church Cemetery. As the church grew throughout the years from 1914 to present, fourteen other men were called to serve as Pastor; The Reverends Daniel Wooding, Floyd Tucker, Tilman Jones, Frank Carter, James Hurst, J.R. Bowen, John A. Gaines, Olin McGowen, Otha Gilyard, Leland Wilder, Ronald L. Owens, William Ingram, William S. Davis, Jr., Michael C. Diggs, Sr. and Gregory S. Smith